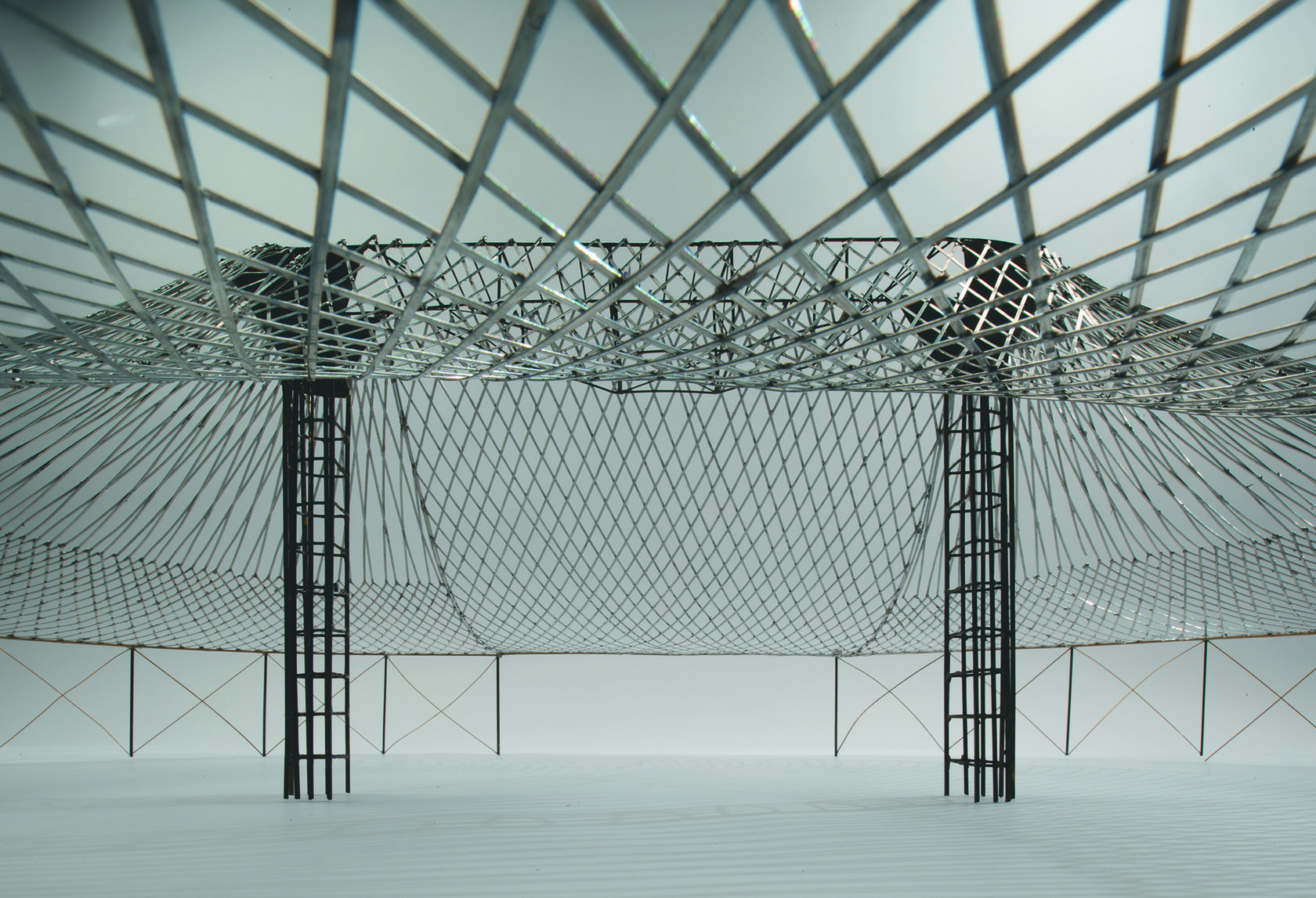 MARCH - Technology module. ВА2 2019-2020.
Vladislav Aleinikov, Vadim Galichan, Marina Gorlova, Alexandra Karpushina, Yaroslava Komarkova, Ekaterina Postoyuk
Along with the round and rectangular hanging mesh coverings of the pavilions erected by A.V. Bari Construction bureau for the 1986 Exhibition in Nizhny Novgorod, the covering of the oval pavilion is the earliest realized diagrid hanging roof of double negative curvature.
The most important advantage of these structures was that they were, on average, two times lighter than structures of similar spans of other structural topologies.
For the study, we chose an oval pavilion, since it combines construction principles of both rectangular and round pavilions.
CONTEXT

At this exhibition, according to Shukhov's design 8 diagrid metal structures were built including 4 pavilions with hanging steel membrane roofs: round, two rectangular and oval, which became the world's first hanging steel mesh membrane roofs. A distinctive feature of all four hanging coverings, which were especially noted by the visitors of the exhibition, was the absence of rafters, so familiar to the eye at that time. All the load from the roof, snow and wind was taken up by an exceptionally thin spatial mesh membrane, sagging in the form of a chain line between the upper and lower supports, calculated and produced according to Shukhov's patented method. 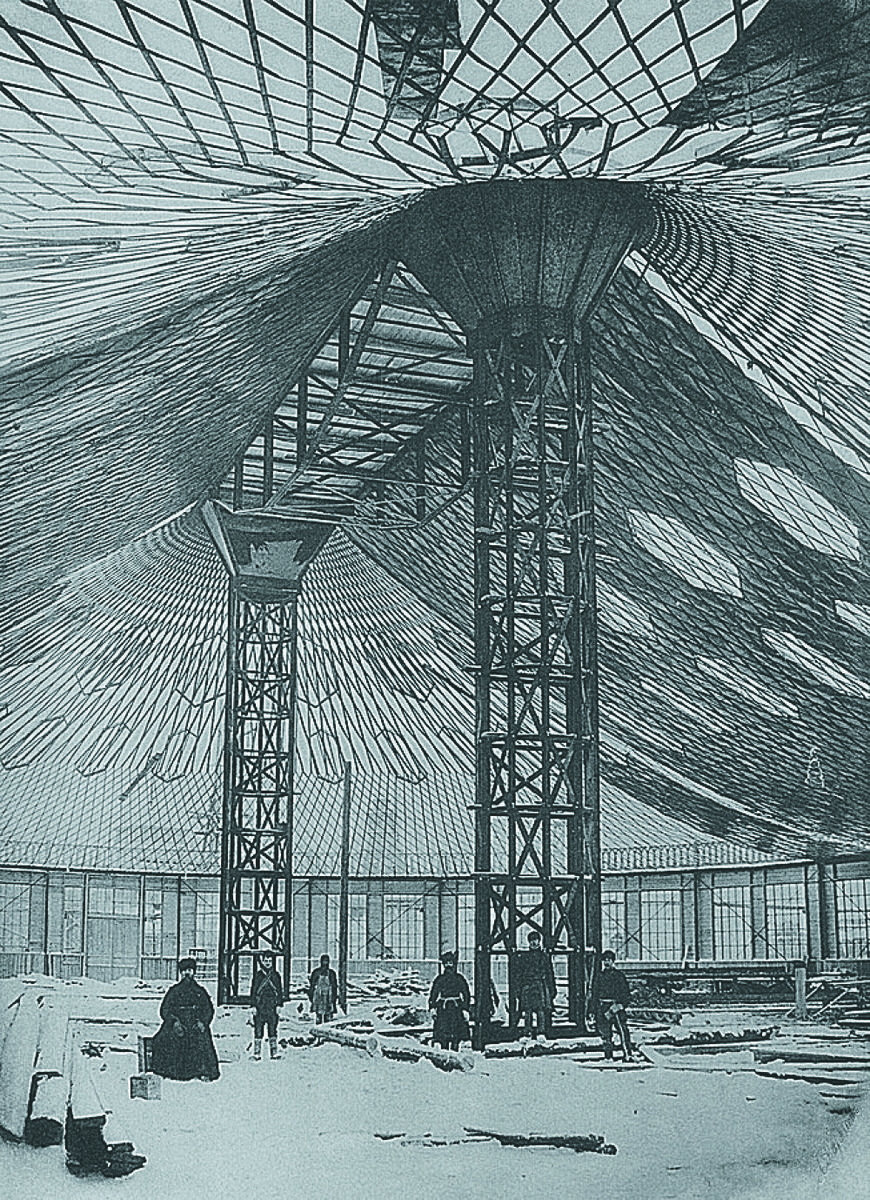 Of the four hanging pavilions, the oval pavilion is the largest by area with dimensions in plan of 71 X 51 m and a height to the top of the roof of 15 m. The pavilion structure consists of a mesh covering, upper and lower support rings, central columns supporting the upper ring, and columns with diaphragms supporting the lower ring. The pavilion's mesh covering is assembled of intercrossing metal strips suspended between the upper and lower support rings and takes the form of surfaces:
- of single curvature in the central rectangular part of the building and
- of double negative curvature in the corner semicircular parts of the building. 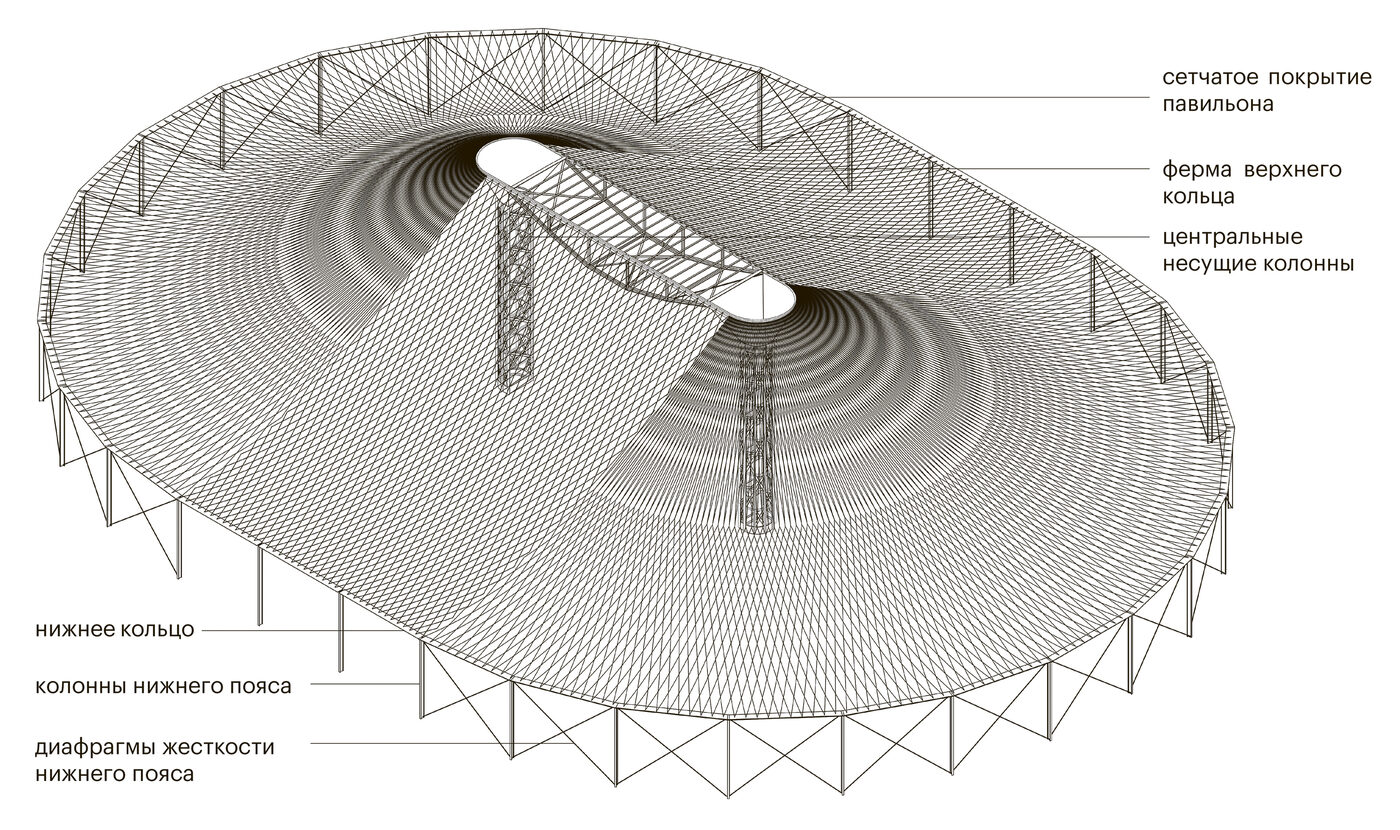 According to Shukhov's theory of mesh structures, the shape of the meridional cross-section of the membrane is an equilibrium line under the given loads. In this case, the material is only subjected to in-plane stresses, and there no bending moments occur. If this condition is met, no other load-bearing elements (including rafters or purlins) have to be considered.
Structural analysis of the mesh structure has confirmed that, under the design loads (deadweight + snow), pure in-plane tension occurs in the membrane. Tensile stress is the most favorable type of stress for large-span structures and requires the least amount of material. The maximum tensile stress in the structure is 16 kN/cm2, which does not exceed the tensile strength of modern steel (21 kN/cm2). However, in his calculations, Shukhov used lower values of strength of 13.5 kN/cm2 and did not put in safety factors. With such characteristics, the construction obviously worked at the limit of its possibilities. 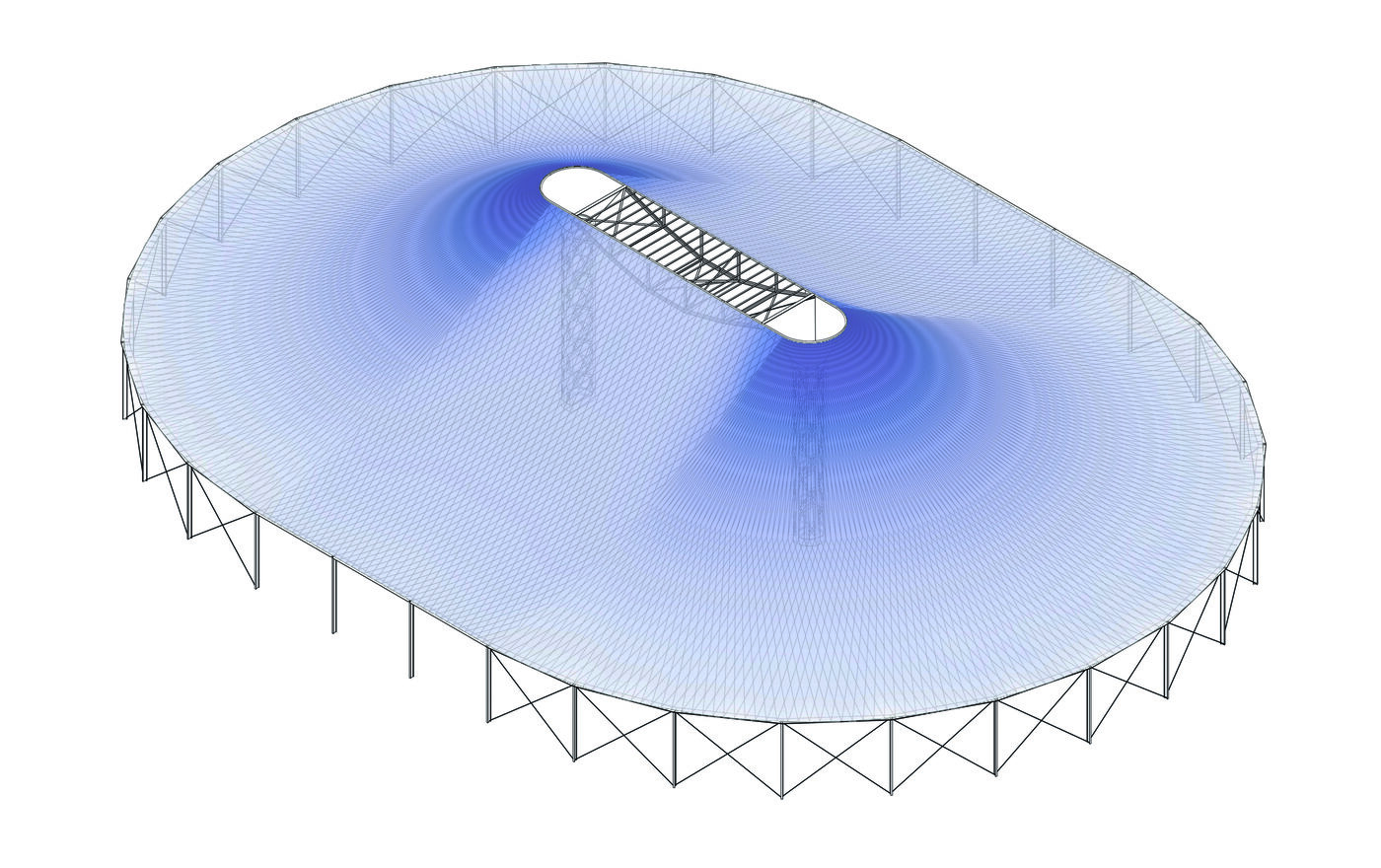 Diagrams of internal forces from a) dead weight, b) snow and c) wind loads
MODEL

Our main goal in creating the mockup was to realize a working structure that sustains loads like a real object. The mock-up was assembled at a scale of 1:50 with overall dimensions of 1 m x 1.4 m. For the mesh, a flat steel wire with a cross-section of 2 mm x 0.5 mm was used .
To obtain the desired shape of the shell, a formwork of glued plywood sheets was used, on which the mesh was subsequently assembled. The formwork was cut on a CNC-milling machine. Finished brass profiles and laser-cut capitals of the central columns (brass, 0.5 mm) were used for the remaining parts of the structure (central load-bearing columns connected by a truss, lower ring and columns connected by diaphragms).

Soldering was used to connect the parts. During the assembly phase, the coating was removed from the formwork and attached to the top chord and columns using solder and wire. The final step was the creation and attachment of the bottom chord of the columns. A sheet of plywood 1.5 m x 1.2 m was chosen as a base plate.
The result of this work is a working model, in which elements take one type of force: the central columns carry the weight of the mesh, the grid works in tension, and the lower and upper rings work in compression.
Model of the Oval pavilion
Model of the Oval pavilion
Photos of the model: Yurii Palmin


Gratitude
We express special gratitude to the A.V. Shchusev State Museum of Architecture and the curator of the exhibition “Shukhov. Formula of Architecture" to Mark Akopian for conducting an exhibition tour and providing archival materials and calculations of V.G. Shukhov, chief architect of GUM Vladimir Kamyshnikov, teacher of MGSU Yuri Yuzhakov, chief engineer of Metal Yapi Vasily Anopchenko and associate professor of the Russian State Humanitarian University Ilya Pechenkin for constructive criticism of the projects.
Sourses
Archive of the Russian Academy of Sciences, F. 1508