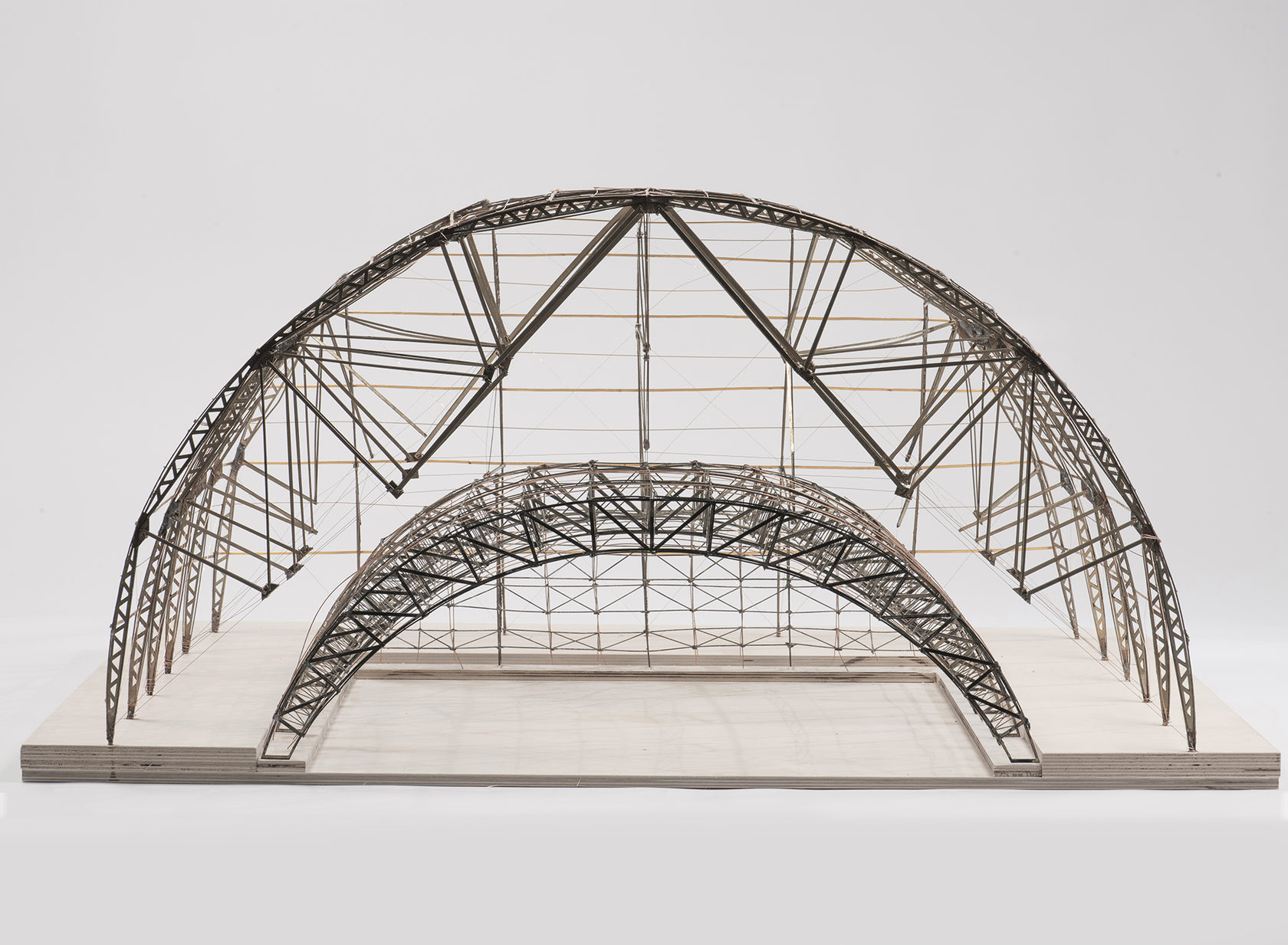 MARCH - Technology module. ВА2 2019-2020.
Fedor Polushkin, Anastasia Slavina, Margo Kim, Ulyana Kravchenko, Nina Grinko, Alexandra Kazandzhan
The three-layer dome structure over the main exhibition hall of the Stieglitz Museum of Applied Art in St. Petersburg with overall dimensions of 24 m x 42 m and an area of about 1000 m2 was one of the largest metal-and-glass domes in Russia at the time of its construction in 1896). The structure consists of lower and upper domes made up of systems of orthogonal planar trusses stabilized in space by longitudinal purlins, cables and diaphragms.
HISTORICAL CONTEXT

One of the iconic buildings of the eclectic era - the Museum of Applied Art of the St. Petersburg State Academy of Art and Industry named after A.L.Stieglitz, is located in the Solyanoy Gorodok district of St. Petersburg at Solyanoy Lane, 15.
The project of the museum was developed from 1885 to 1896 by architect M.E. Mesmakher with the aim of combining different styles and eras under one roof, thus giving students the opportunity to study world culture in the walls of the academy. A huge number of objects of decorative and applied art were collected here, which were distributed in various halls, stylized after different periods.
At the heart of the building, Messmacher made a large exhibition hall - a wide Italian courtyard-palazzo 17 х 29 m with a perimeter colonnade, intended for exhibiting student works. The architect considered that in a northern climate, an open courtyard would hardly create a feeling of Italy and, like the Central European counterparts of a similar typology (art schools and museums), he decided to cover the courtyard with a three-layer dome made from glass and metal, covered with stained-glass windows in the inside, letting diffused sunlight into the courtyard with a colonnade. 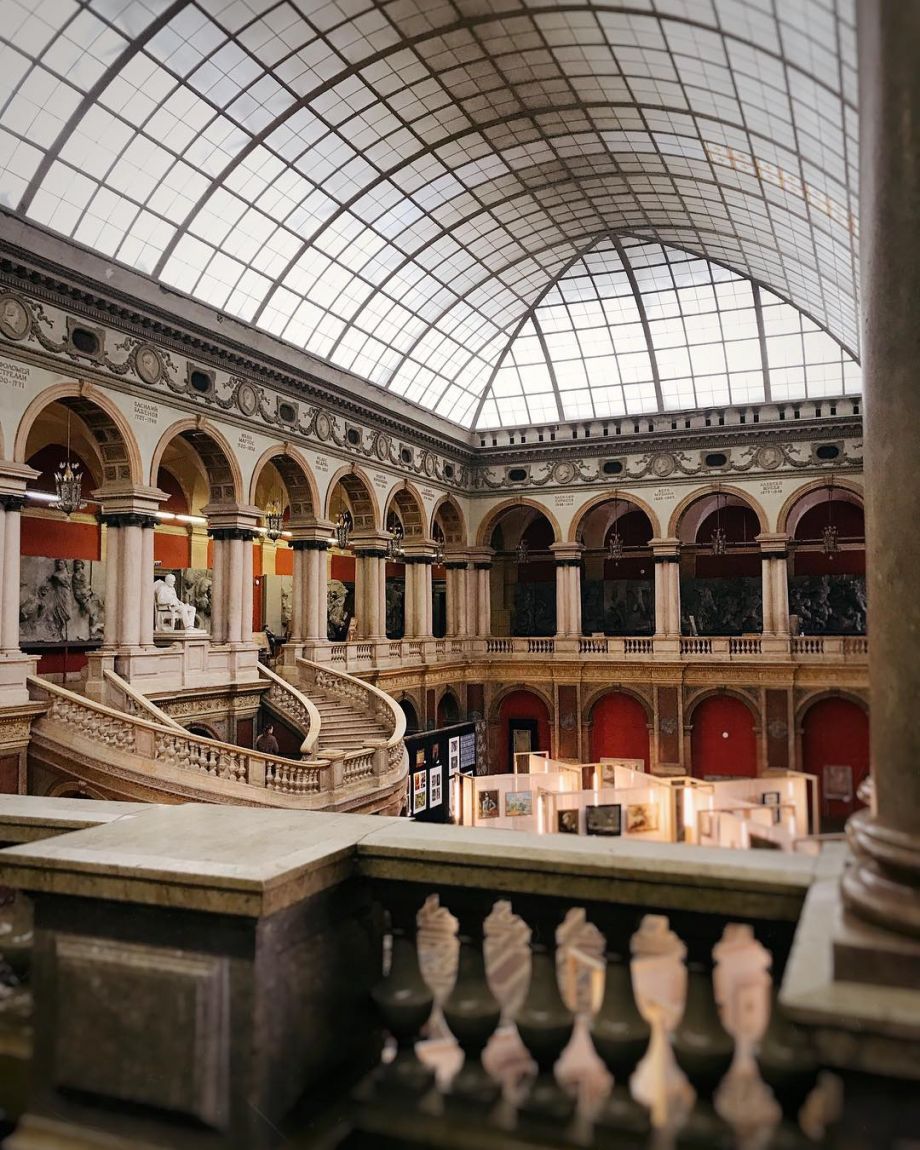 The structure of the three-layer roof includes:
- The lower dome, consisting of sickle-shaped trusses in the transverse direction, connected by longitudinal trusses. The dome is glazed on both sides.
- The upper dome, consisting of arched trusses in the transverse direction connected by a system of cables and diaphragms. The dome is partially glazed on the sides and covered with wooden planking and sheet metal on the upper part.

The upper dome consists of arched trusses connected to each other by a system of purlins and diagonal struts. The arches have hinged supports and the thrust, as well as the forces induced by live loads, are absorbed within the structure itself through a system of ties and rods. Each truss consists of an upper arched chord formed by small trusses to increase bending resistance, diagonal rods, and lower chord cables connected by a horizontal tie.

The system of the upper dome can be attributed to the type of lightweight structures based on the principle tensegrity (a portmanteau of "tensional integrity"). Such systems are made of rods and cables, in which the rods work in compression, the cables - in tension and the equilibrium is achieved by the respecting distribution of the elements, their mutual positions and orientations. 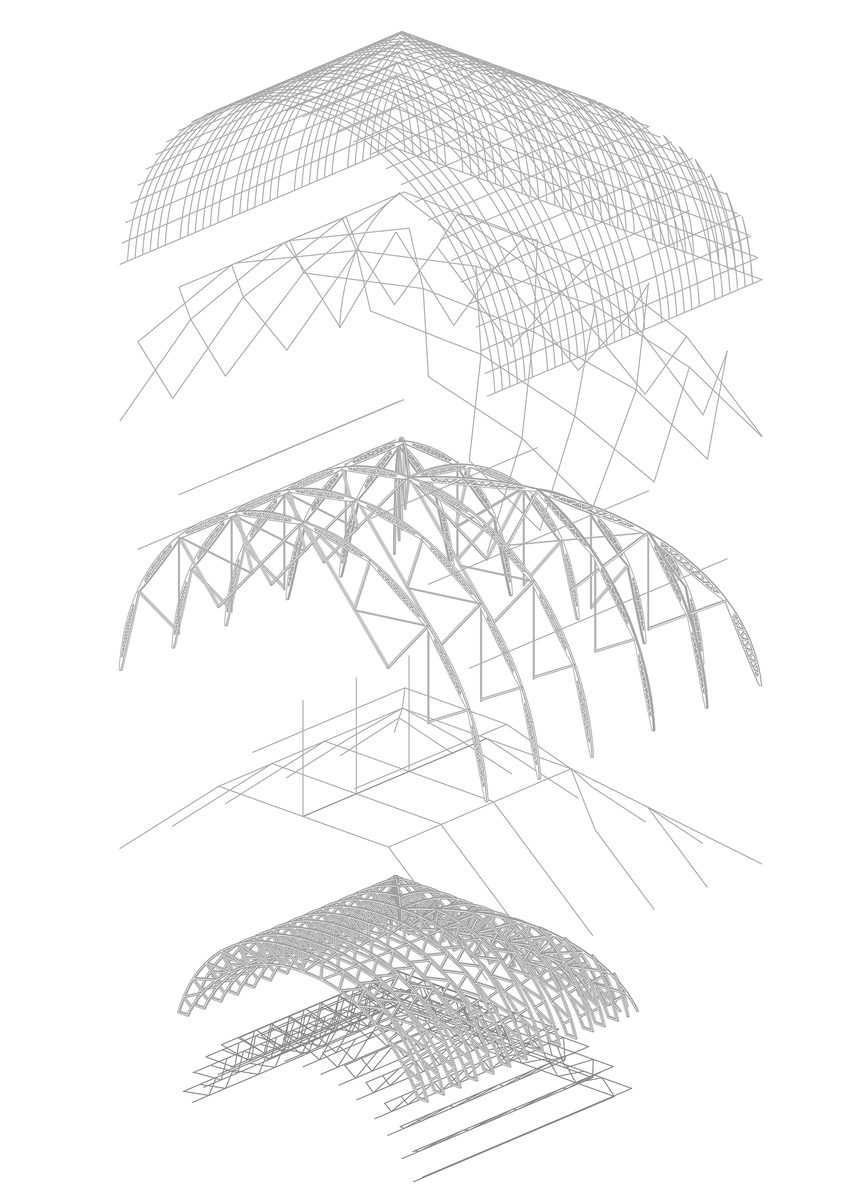 The arched truss design of the upper dome is a hybrid of the Polonceau truss and the three-hinged arch. It borrows the internal system of struts and ties from the Polonceau truss, and the shape of the top chord from the arch, thus combining the positive characteristics of both systems.

1. Polonceau truss (Wiegmann's, Russian)
The Polonceau truss consists of a rectilinear top chord, intermediate posts, and bottom ties. Under vertical loads (gravity, snow) the bending stresses of the upper chord are compensated by compressed posts, which are stabilized by tensile ropes. In order to compensate the overall thrust of the system, the lower ends of the posts are connected by a horizontal tie, in large spans suspended from the ridge of the truss by means of an additional rope.

2. Arch
Compared to rafter systems, arched structures are generally lighter need less material to bridge compatible spans. However, the main problem of all arched structures is the thrust, which can be absorbed by the massive supporting walls or by the horizontal tie. Another weak point of arches is their buckling under uneven load (snow or wind). The structure can be stabilized by increasing the cross-section or by installing additional diagonal ties.

3. Combined Museum's dome system
When developing the system of the dome of 24 m span, possibly based on the climatic conditions of St. Petersburg, the architect created a design that would combine the favorable qualities of the two above-mentioned systems. The design of the upper chord in the form of a circular arch allows to reduce the bending moments from the vertical load, and the combination with the system of struts and ties increases the rigidity of the arch, prone to bulging under unequal loads. 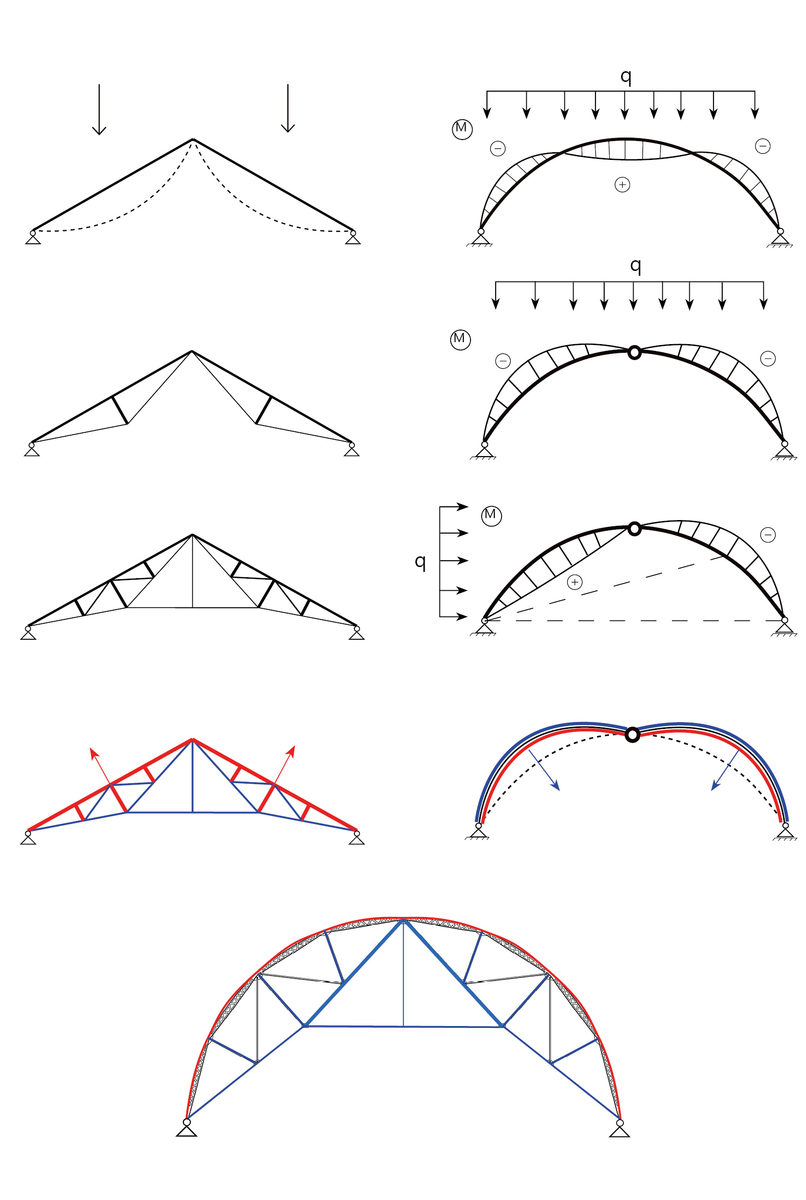 Diagram of coating structure elements
4. Snow load
The normative value of snow load in St. Petersburg is taken as 2.4 kN/m².
The load from snow is taken up by the roof covering (area), transferring it to the purlins (linear), which in turn transfer it further to the arches (point).
The stress diagram from the snow load shows that the arch upper chord works mainly in compression, while the middle struts and cables work in tension. Unlike the compressed posts of the Polonceau truss, in this case, the tensioned strut does not allow the arch to bulge outward.
The horizontal central tie plays an important role as it is the main element that absorbs the thrust and prevents the arch from deforming under snow.
5. Wind load
The normative value of wind load in St. Petersburg is taken as 0.98 kN/m².
As in the case of the snow load, the value of the point load transmitted from the purlins to the arch was calculated in accordance with the respective angle of the rotation of the point to the verticality.
The stress diagram from the wind load shows that the top chord and cables on the windward side work mainly in tension, while the struts and cables on the leeward side work in compression (ties are not active). The comparison with the snow load shows that the elements are subject to a different type of stress and that other elements are involved in the load.

Assembling the scale model of the dome was not an easy task. As a material, we chose brass, cut on a laser machine according to the digital model, combined with copper wire of various cross-sections. During the production of the model, we were faced with many challenges.

Firstly, it was necessary to develop a method to simplify the detailing of the design that would not compromise the overall structural and construction principles. Secondly, the rigidity of the structure is obtained only after assembly, and until then the model needed a large number of additional supports. Also, soldering, chosen as the main method of connection, caused many difficulties, which were overcome with the help of paired work of the team members.
Photos of the model: Yurii Palmin